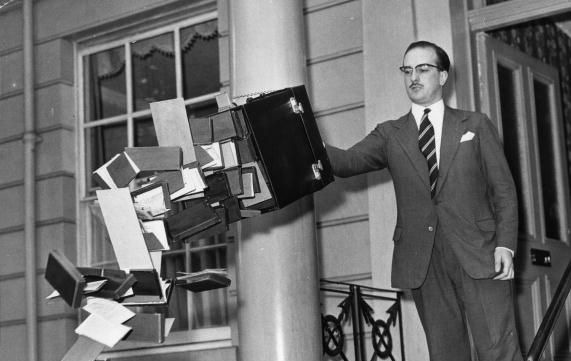 In a very real and literal sense, the world wouldn’t be the way it is without inventions. From the invention of the wheel to the latest Bluetooth-enabled bread slicer, humans just can’t stop trying to make new things, or make old things better, or find new ways to use old things; once a thing is made we’re instantly bored with it and want to tinker with it.

In the mid 20th century, before computers, it was a paper world. And those papers were transferred in briefcases. And, as any woman with a purse can testify, a man with a briefcase is at some point vulnerable to having it snatched away at the train station. So some genius named John Rinfret decided that it wasn’t enough to, say, handcuff yourself to the briefcase. He designed a pull chain that, when activated, opened the case from the bottom and dumped all the contents onto the street.

The theory was that the thief would get away with an empty case while the contents, which may include random work files and the latest issue of Playboy (this was the 60’s remember) were spilled out for all and sundry to see, but for you to pick up and save. Hooray. Needless to say, this was a total loser of an invention and no one ever heard from John Rinfret again.